A bored Finnish girl tries to de-stress in a sauna. Her theater collective – all Brazilians except for her – is devising an extremely political show due to the situation in their home country. She is struggling. She looks for a strong political voice, alas, in vain. What can she say when her struggles are nothing compared to those of her counterparts?

Banana Pride™ is a cabaret of failure. Your host, an indigenous Carmen Miranda whose childhood dream was to be a blonde actress in Germany. With personal stories and a series of comical vignettes, we embrace the bizarre images that others have placed upon our bodies and bring it to the level of absurdity.

Each number of our cabaret tries to juggle the parallel realities of a genocide of indigenous people, the destruction of the Amazon, and the objectification of Latinas; while at the same time turning it into a carnival parade. 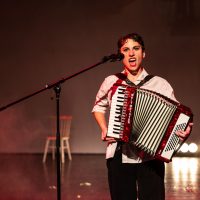